Lingerie is a 19th century word from the French linge, meaning "linen." And from the 19th century "unmentionables," lingerie is now not only mentionable but essential,. A modern study reveals the average woman has 34 pairs of underwear, and the selection and wear (if not exactly display) of lingerie is now artistry. There are do's and don'ts for lingerie, guidelines for the selection of underwear—and the strapless bra is now such a critical component, an entire study is devoted to it. Look through our tips for advice on the modern "under"-world.

The following articles are available for the 'Lingerie' topic. Click the article''s title (shown in bold) to see the associated article. 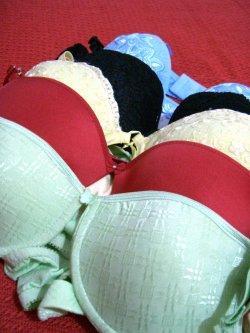 Lingerie Fashion Do's and Don'ts
Even though not many—if any—will see your lingerie, but there are still fashion guidelines to keep in mind. You want to be classy all the time, even in the bedroom.

Picking Flattering Lingerie
Lingerie can sometimes be the key to feeling great in a great outfit, so you definitely want lingerie that flatters you, even if no one is going to see it. There are however a few key guidelines to picking flattering lingerie and if followed, will bring an added measure of confidence!

Strapless Bras
If you are wearing a strapless dress, you don't want your bra straps hanging out. Instead, wear a strapless bra to keep your undergarments hidden.

See Go Deeper at the top of the left column for related topics...

FREE SERVICE: Receive an e-mail several times each week with a featured beauty tip. Enter your address and click "Subscribe."

(Your e-mail address is not shared with anyone, ever.)